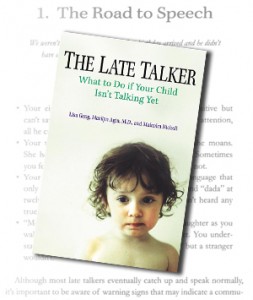 Is Your Child A Late Talker?

· Are they quiet? · Seem shy? · Not talking like their peers?

· Allow you or siblings to speak for them? · Do you wonder why?

Your baby’s babbling and toddlers first words can be music to your ears. When faced with a child who doesn’t speak or seems to have difficulty with words parents are often told that their child is “just a late-talker.” Unfortunately, all too often, that is not the case. The American Speech and Hearing Association (ASHA) estimates that 16 million Americans under the age of eighteen have a chronic speech-language disorder and that some 45 million Americans are affected by communication disorders of one kind or another which was announded by Congresswoman Carolyn McCarthy during the kick-off of the Better Hearing and Speech Month Health Fair in Washington, DC on May 8, 2002 .

Most parents, and even most pediatricians, are not concerned when faced with a two-year-old who passes all of his developmental milestones on time – except speech and language. However, they should be. It is vitally important to identify and treat speech and language challenges as early as possible in a child’s life, with a strong emphasis on the early intervention years of birth to three. At this age the brain is undergoing the most rapid development. No harm will come from therapeutic services. “Early intervention services are benign in their delivery but can be extremely beneficial. Don’t wait. Six months for a 2 year old is equivalent to a quarter of their lifetime developmentally” as Dr. Judy Flax says, who is a Research Coordinator of the Tallal Lab and a Senior Research Speech Pathologist for the Infancy Studies Laboratory at the Center for Molecular and Behavioral Neuroscience (CMBN) of Rutgers University, Newark, NJ

To find out about your nearest Early Intervention program you should call your local school district, they will be able to refer you to the program appropriate for your child’s age. Waiting to refer is a loss of precious time that may impact on the child’s learning ability and social-emotional well being in later years. Pediatricians and parents should insist on a speech and hearing evaluation as soon as there is a real concern about a child’s early language development. Early referral is endorsed by the American Academy of Pediatrics, and the American Academy of Neurology. In addition, “any child with a severe speech/language delay should have a comprehensive health and neurologic assessment to look for medical conditions that may be causing or contributing to the delay” as Dr.Marilyn Agin says, a developmental pediatrician who is the Medical Director for Early Intervention for NYC.

CHERAB is a non-profit foundation that focuses on raising awareness of Apraxia and other speech and language delays, and the importance of early intervention. Working with developmental pediatricians, speech pathologists, neuroscientists and major hospitals the CHERAB Foundation is working towards research on therapies which may help late talkers with Apraxia, Dysarthria, delayed language development, Autism and other speech and language impairments. A list-serv overseen by pediatricians, speech-language pathologists, and educational consultants is run by CHERAB and can be found at their web-site. Through the list you can connect to many other parents who have children who have speech or language delays, and find out what they have been able to do to help their child.

Some speech disorders can overlap, or be misdiagnosed. For example, “Verbal apraxia, a disorder of central nervous system (CNS) processing, and dysarthria, a disorder of output, are commonly confused”, says Dr. Andrew Morgan, chief of child development at the Chicago College of Medicine. “Experts are able to differentiate between these two disorders by listening carefully to a child’s speech and by identifying certain physical clues”, says Dr. Morgan, but adds, “These disorders are poorly understood by physicians and by a lot of speech therapists as well.” It is possible for phonological disorders, apraxia and dysarthria to all occur together in the same child. Speech Language Impairments, which is connected to language based learning difficulties may also be present. And the severity of each may vary.

Apraxia is perhaps the most misunderstood of all the speech disorders. So, what is apraxia? Verbal Apraxia is a neurological motor speech impairment that involves a breakdown in the transmission of messages from the brain to the muscles in the jaw, cheeks, lips, tongue and palate that facilitate speech. There is no obvious weakness in these muscles and the child may well be able to move them quite happily when not trying to speak. Apraxic children, who are usually seen as “just late talkers” when young, are able to comprehend language at an age appropriate level, however have difficulty expressing themselves using speech. With apraxia, a child knows what he wants to say but there is a road block obstructing the signal from the brain to the mouth. For any child with a speech disorder, but especially with apraxia, the earlier therapy is begun, the better the results for your child and their social-emotional development.

So how do you know when your child is having problems with speaking? When is a good time to seek out help? Being aware of average speech milestones can also help you decide whether or not to speak to your doctor. Some guidelines are provided here for your information, but if you have concerns about your child’s speech or language development, or any other developmental issue, make an appointment with your pediatrician so you can discuss these issues. While the average milestones are a good way to measure development, every child develops at their own pace, and this overview should not be used to diagnose a specific problem.

Cause for concern in first 6 months
· Cannot focus, easily over-stimulated · Seems unaware of sound, Cannot find source of sound · Seems unaware of people and objects in environment · Does not seem to understand or enjoy imitating · Lack of connection (eye contact, vocal turn-taking)
· No babbling, or babbling with few consonants

Cause for concern in first 12-18 months
· Lack of communicative gestures · Does not attempt to imitate or produce single words
· Does not persist in communication (may hold hand up for help, but gives up if adult does not respond immediately) · Limited comprehension (understands less than 50 words) · Limited vocabulary (speaks less than 10 words) · Lack of new words between the age of 12-18 months

Adapted from Clinical Practice Guidelines Communication Disorders III 22-25
In addition, the policy statement from the neurology journal Neurology, (August, 2000), states that Absolute Indications for Immediate Evaluation include,
· No babbling or pointing or other gestures by twelve months · No single words by sixteen months · No two-word spontaneous phrases by twenty-four months · Any loss of any language or social skills at any age.

Early feeding problems could be a sign of later speech challenges. The same muscles that are used for eating are used for speaking. A baby that has trouble nursing could be a early sign that the baby has muscle weakness in the oral motor area for example. If oral-motor difficulties are present your child should have an evaluation by a pediatric medical and oral motor speech expert to determine the cause and best therapy to possibly prevent some future speech problems. A few possible signs of oral-motor problems are outlined next.

Does your child have difficulties with any of the following?
· Blowing (unable to blow out birthday candles, or blow bubbles by one year) · Kissing or making a kiss face · Licking his lips · Imitating facial expressions such as smiling · Chewing or transitioning to solid foods · Excessive drooling

It is important to note that some children have no difficulty with oral-motor movements, and may also pronounce speech clearly, but still may have difficulty learning language. There are many different types of speech and language problems, which together represent the number one learning disabiltiy in schools today. That is why again it is important to seek an assessment if a child is not attaining the language milestones at the expected age. Early intervention is key to your child’s development. If you have any concerns about your child’s speech or language development be sure to express them to your child’s doctor. If you want to find out more about early speech and language development and CHERAB’s efforts to help children with speech and language delays you can contact the group or visit the web-site at:

Book: The Late Talker, What To Do When Your Child Isn’t Talking Yet Dr. Marilyn C. Agin, Lisa F. Geng, Malcolm Nicholl

To find a Speech Language Pathologist near you:

← Preview of ‘Nobody Ever Told Me (or My Mother) That!
Horns as therapy tools By Sara Rosenfeld-Johnson MS CCC-SLP →