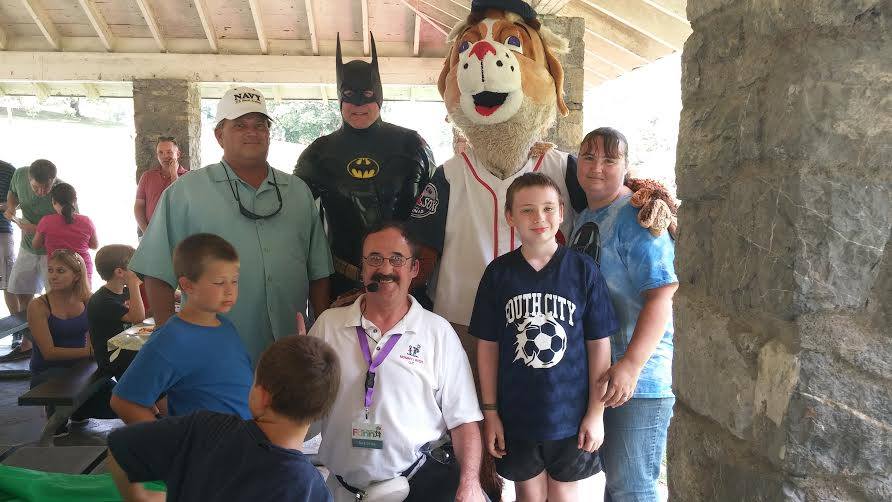 Daymien Manus went from zero to 60 in the matter of a day; friends that is. For a little boy who once thought the world hated him, a 10th birthday celebration sponsored by the crowdFunnit foundation has given Daymien a whole new outlook on life. “I love it. It was the best day ever,” he said after 60 people attended his Star Wars Super Hero LEGO party in Roanoke, VA.

crowdFunnit aims to bring people together, raising awareness about differences while fostering acceptance and compassion. The end goal is to put an end to bullying and alienation, which are all too prevalent in our society.

Reeling from the recent murders of two local newscasters, Roanoke, VA needed a pick-me-up and Daymien’s party had all the right ingredients. In attendance were all the wonderful community members who came out show their support, as well as Batman, Mugsy the Red Sox Mascot and officers from Safer City Roanoke, an anti-bully task force set up through the Roanoke Police Department.

Along with the LEGO build contest, an enormous bounce house, the ever-popular scooter rides and numerous other games, local and regional businesses chipped in to make sure nobody went hungry. Chick Fil A and Fat Guys Sub Shop provided lunch and Technicolor Cakes crafted a huge Star Wars LEGO birthday cake solidifying a place in both the hearts and stomachs of all attendees.

Best of all, Daymien made many new friends!

Close up of the Star Wars LEGO cake Batman is carrying

Prior to Daymien’s crowdFunnit birthday party, Daymien was bullied to the point of having panic attacks alone with his autism diagnosis.  His mother Stephanie said, “He keeps asking me why everybody hates him.  When Daymien asked for a party this year I was thinking no, not again.”

Safer City Roanoke officers of all ranks visited throughout the day, playing with the kids, keeping an eye out for everyone, answering questions and wishing Daymien a happy birthday complete with sirens and lights from their patrol cars.

Some early birthday surprises arrived in the weeks leading up the party. GEEK MOB Roanoke gave Daymien and his family 4 passes to their upcoming festival and his favorite author, Tom Angleberger, of the Origami Yoda books, autographed and donated his entire series, personalizing a few extra illustrations for the birthday boy.

Daymien and the crowdFunnit team would like to deliver numerous special thanks to the incredible people who made this day so special.

crowdFunnit board member Richard Stripp, Sr. and his wife Liz, resident photographer for the day, traveled nine hours from New Jersey in their crowdFunnit mobile, picking up Michael Gerlack from Maryland, host of the radio program Insight On Disability as well as and Craig Lahey and his 11-year-old son Declan from Pennsylvania on the way.

Real life super hero and cancer survivor Craig Lahey shares a birthday with Daymien. As he is prone to do, he donned his Batman suit and mingled with the crowd while his son Declan went out of his way to play with all the kids in attendance.

Craig, now cancer free, spent the hour before the event receiving a treatment as part of his ongoing therapy and had to retire to the crowdFunnit mobile a few times due to exhaustion. Regardless, he didn’t let his fatigue hamper the day’s festivities or his spirit.

In addition, Daymien’s birthday party was on Craig’s birthday too.  For Craig, being able to bring smiles to kids’ faces was a birthday present to himself.

Craig’s son Declan was a true ambassador for crowdFunnit, going out of his way to interact with Daymien and make all the other party goers feel welcome and appreciated. No small feat for a shy 11-year-old.

A week before the party, Michael Gerlack hosted Richard, Daymien, his mom Stephanie and crowdFunnit founder Lisa Geng on his August 23rd show Insight On Disability to discuss crowdFunnit and Daymien’s party.  Richard was invited back following the party on August 30th to discuss the party and the overall reaction to the event.

For Mr. Rick who is a minister, a retired ­­­­special police officer and a person who has worked with special needs children for the past 15 years, and author of the book Mommy I Wish I Could Tell You What They Did To Me At School Today, bullying hits close to home. Bullied as a child, he’s made a career out of protecting the underdog. “Lonely is bad enough but to tack on fear to that, the fear of getting bullied, no person, especially a child, should ever have that feeling,” he said. “Coming together just to show that the good people in the world outnumber the bad, that’s what Daymien’s party was all about

WDBJ CBS was one of the stations that had covered Daymien’s upcoming party along with WSET ABC news.  Our heartfelt condolences go out to the family and friends of WDBJ CBS reporter Alison Parker, 24, and her cameraman Adam Ward, 27 who both lost their lives in the tragedy the unfolded just days before the party.

Still riding high from the all the day’s excitement, Daymien, spent hours after the party building the LEGO kit given to him as a birthday gift from Richard and Liz Stripp’s son Ricky Jr., his wife, Stephanie and their 1-year-old son, Ricky.  Daymien built what he believes is a very good replica of Richard’s motor home.  We think so too!