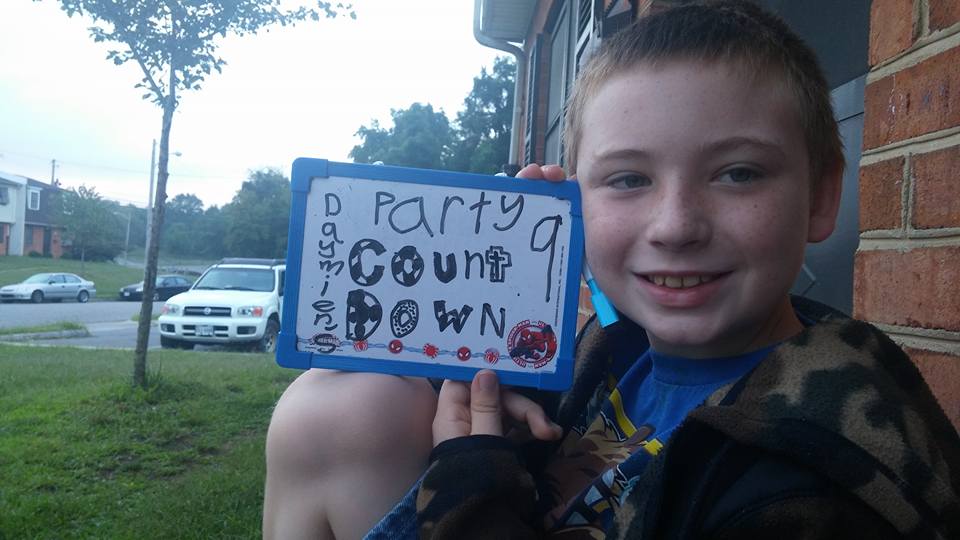 “He keeps asking me why everybody hates him.  When Daymien asked for a party this year I was thinking no, not again.” ~ Stephanie Manus

Saturday, August 29 , 2015 at 12:00pm – 4:00pm 2426 Fishburn Park Brambleton Ave SW, Roanoke, Virginia 24015 RSVP Here and also send a Happy Birthday message to Daymien who keeps checking the wall!  We are looking to raise 275 to cover basic birthday party costs, every dollar helps and any money over our goal can also go to help other children in need of support.  Please contribute here.

If you’d like to send a card or gift to Daymien, please send to:

Daymien Manus is eagerly anticipating his upcoming birthday, August 29. The big 10! And if you ask him, he’ll say a Lego Star Wars party would be awesome. More than any material gifts though, Daymien is hoping to share his birthday celebration with other kids in the community, kids who accept and appreciate him for who he is.

Diagnosed with autism, coupled with severe panic attacks, he finds himself the recipient of bullies, jokes and name calling which not only break his heart but the hearts of his parents. Because of this, he currently attends a special school for autistic children.

Cops recently responded to Stephanie’s 911 call as other parents stood by watching her son get bullied by some neighborhood kids. Recognizing Daymien’s name, one cop asked if he was the one having the party. “We look forward to being there,” he said as he left.

“It breaks my heart he can’t be a little boy who can go out and safely play without being teased and called names by kids who won’t even try to get to know him.  He sits alone every day crying and reading books.”

And speaking of books, Daymien’s favorite author is Tom Angleberger of the Origami Yoda series. Angleberger’s protagonist is an odd little kid who likes to fold and play with origami Star Wars characters, a personality that resonates well with our birthday boy. Unbeknownst to Daymien, Stephanie tweeted Mr. Angleberger, a fellow Virginia resident, in hopes he might attend.  For all of Daymien’s failed birthday party attempts, (which is basically all of them),  having Mr. Angleberger there would just be the icing on the cake!

Amazingly the author tweeted back to say he may attend, but if he can’t, he’ll be sending Daymien a pre-release copy of his new book.

The Manus’ survived Hurricane Sandy despite losing everything. They moved down to Virginia for Nick’s job transfer, only for him to be laid off shortly after arriving. Suffice it to you say, they take life’s blows in stride.

Each year we spend everything we have to throw my son a party and no one shows up. Last year we had to talk to the venue and ask if there was any way we could book a party with only 4 people because they charge a minimum of 8 kids.  Thankfully they understood and allowed it, but it was hard having to even ask them knowing no one would come.

They make ends meet on little income while raising two special needs kids. Daymien’s younger brother Gabe is also diagnosed with autism and a host of co-existing conditions. As a prolific baker, Stephanie recently packed her boys into the car with 200 homemade cupcakes and a cake, driving two hours in order to help another young special needs boy they had never met celebrate his birthday in style; by way of a community birthday party bringing accolades and well wishes from around the world.

I spoke to Lisa Geng who was the one behind making another child’s open invitation party such a success after she shared it to Reddit.   And shared Daymien’s situation which inspired her to found crowdFunnit.  I thought maybe if we too do a community party maybe he will make new friends that will be kind to him.  Daymien deserves a real friend.

A birthday celebration complete with kind spirits and playful minds, cake, toys and good fun would start Daymien’s year off to a great start

Daymien’s birthday party was his  “Best Day Ever”