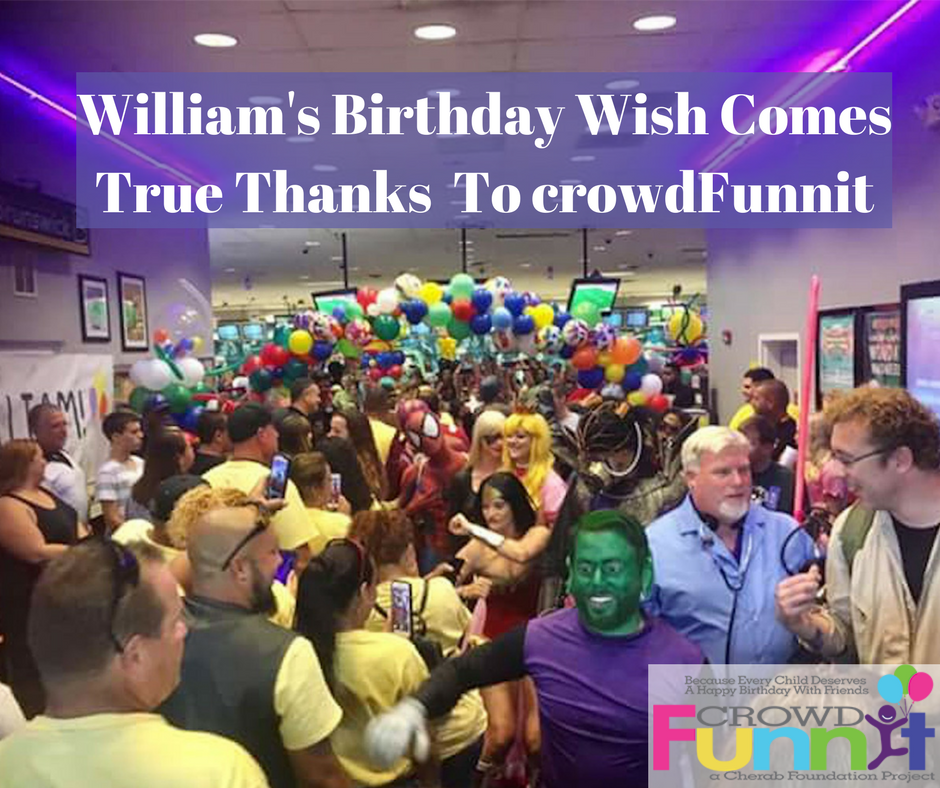 William Morales’ birthday wish was to make a few friends. Thanks to crowdFunnit, William now has a whole community of friends. 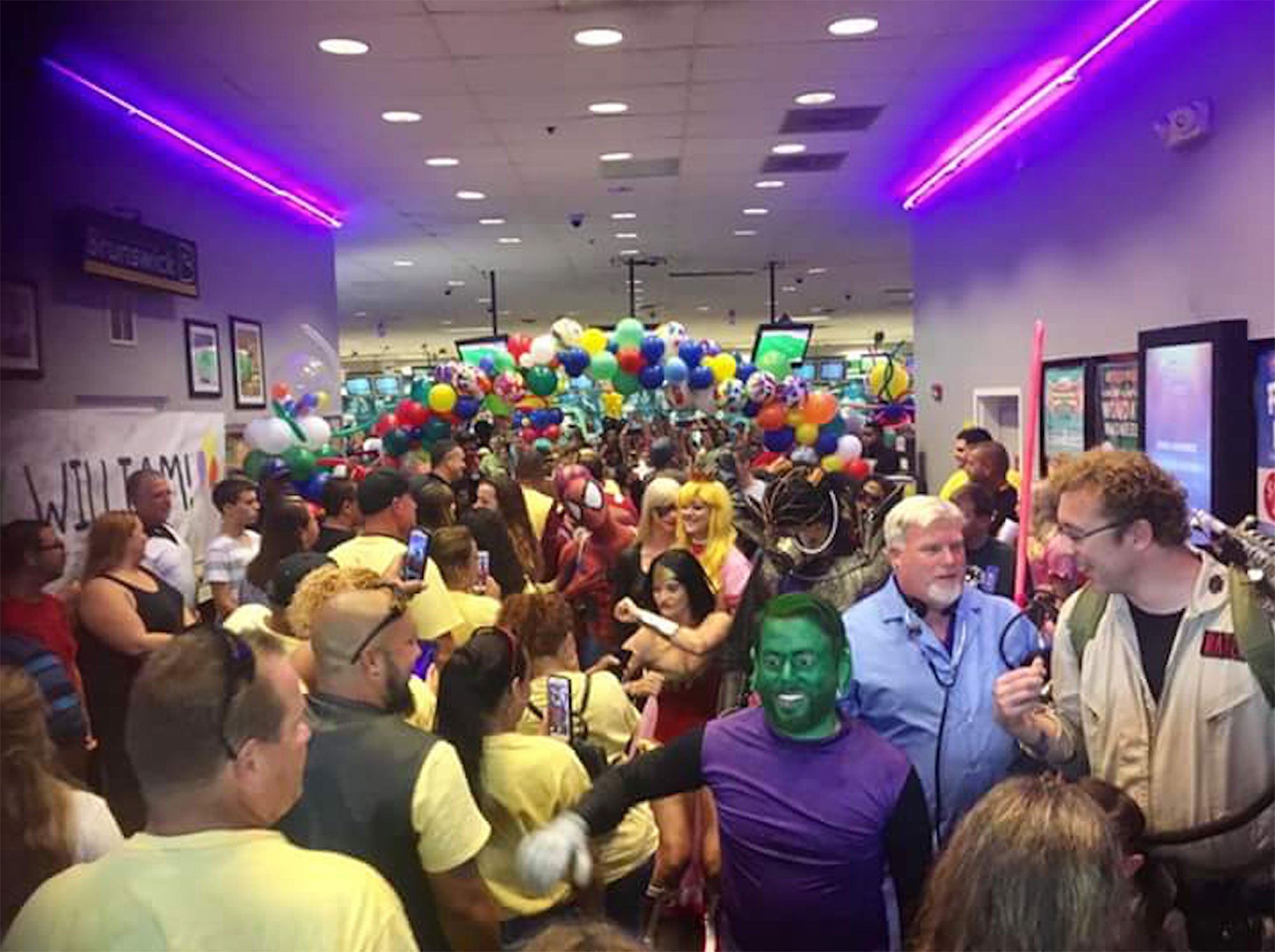 It’s not just William, who is diagnosed with Autism, and his family who benefitted from his wish for friendship, locals and people from as far away as Daytona, Tampa and Miami came both in support of William or because they too find themselves in a similar situation, alienated or bullied by folks in their communities.

“It seemed like hundreds of thousands of people came out to wish William a happy 13th birthday” at the Port St. Lucie SuperPlayUSA with support from Duffy’s Sports Grill, Magnolia Cakes & Confections, the Port St. Lucie Police department and the Police Athletic League. “crowdFunnit was founded with the intent of bringing an awareness and an end to alienation and bullying in a proactive way,” said crowdFunnit founder Lisa Geng, a Port St. Lucie resident. “The acceptance, compassion, and friendships that happened for William and his family and those who have come to support or be supported have been amazing.”

“I don’t want to make it about just my son,” said Tricia Morales, William’s mom. “I want to make it about all the kids who suffer like my son does.” This morale wove its way through the three-and-a-half-hour celebration which began with a police escort of hundreds of motorcycles, classic cars and even the Ghostbusters car filled with Ghostbusters.    People came because of the message, that it’s ok to be different, that people care and that you are not alone. Local and national news media helped make the event such a success as well. Due to coverage of William’s crowdFunnit anti-bullying birthday party by Hometown news, the local ABC, CBS, Fox, and NBC news as well as Inside Edition, and People the message spread, with close to 1,500 birthday cards and letters arriving from across the country, quite a few expressing that they or their child is in the same situation as William.

A number of the parents that attended William’s crowdFunnit event broke down in tears expressing how their child was in the same situation as William.  That impact even hit people that saw the coverage on TV.  Mary Ramirez, whose 12-year-old son Christopher is very similar to William saw the TV news story in the days leading up to the event and was ecstatic to learn of the crowdFunnit mission. “When I saw William and his mother on TV, it hit me in a spot that I am very familiar with,” said Ramirez. “If it did that to me it probably did it to hundreds of others.”

William’s story didn’t just resonate with children.  Robert Jalil, a member of the local Treasure Coast Cosplayers (TCC) group – individuals who come together dressed as famed book, movie and videogame characters and superheroes – wore his Starfleet Captain uniform from Star Trek II The Wrath of Khan. Jalil, who has Asperger’s, wept before the party started. “Being a part of that party meant the world to me especially speaking to William himself,” he said. “I was telling him how my past life was like when I was in school and I felt rejected. It wasn’t until I was an adult that I felt accepted by others and was so happy for William that he could find acceptance by others in the world so young”

Jo Starr, vice-president of the TCC said many of her group’s members had a personal interest in attending the crowdFunnit event, as so many feel alienated from what society considers the norm. The super heroes were in attendance to let all those who are bullied and alienated know they are worthy, amazing human beings. “But also it’s what it did for the members of my group,” said Starr. “making a difference when they feel different themselves. It lifted spirits.”

Due to the apparent need,  crowdFunnit is currently planning a community event in the upcoming months in support of all those in need of friendship, as well as acceptance and compassion. 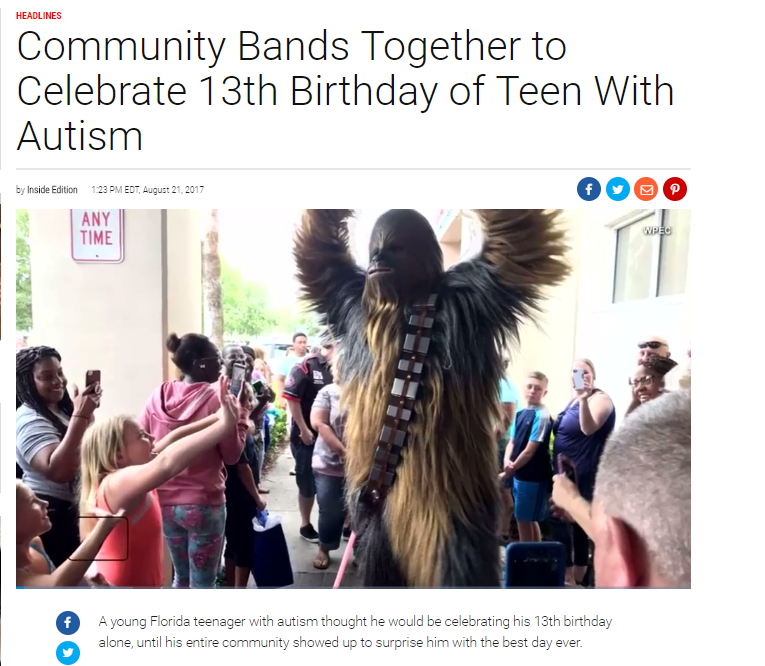 Videos About William’s crowdFunnit Party From Star Wars, Inside Edition, And More

According to Port St. Lucie Sergeant Richard Schichtal, Port St. Lucie prides itself on their reputation for being one of the safest cities in the state and country. “Bullying, by definition, doesn’t fit the definition of safety. This is why we get involved in community activities such as William’s crowdFunnit event because it pays off, resulting in a safer city, tolerant of differences.”

Isis Dale, one of those moved by the event but unable to attend sent a letter that sums up William’s crowdFunnit experience which read, “I believe you have friends everywhere, you just haven’t met them yet.”

It appears that 13-year-old William Morales has gotten that message since his crowdFunnit party he has a bright new world around him filled with friends and invitations to numerous upcoming parties and events.  William is no longer being bullied or alienated at school and has even been asked to be a mentor to other children that need support.  He stands with a confidence he never had before, smiling more often too.  Thanks to crowdFunnit William’s birthday wish for friends came true!

While crowdFunnit throws a birthday party for a child that is bullied or alienated, it’s not about one person, it’s about helping to foster acceptance and compassion for all people who feel alienated and bullied; educating, supporting and excepting our differences.

Since we’ve had a huge interest from people touched by our story who would like to attend a crowdFunnit event, we are currently planning one in Pennsylvania and one Florida in the next few months.   The one in Florida will be for a group of children that are either bullied or alienated and in need of help.  Again the need for this was apparent through William’s crowdFunnit event that may other children are in te same situation in need of a friend and some compassion.  If your child is being bullied or alienated, please contact us for help.  We also appreciate any donations to help us with our mission. We are a grassroots 100 percent volunteer 501(c)3 Any donation is appreciated.   Thank you so much and keep updated by our Facebook page and website  ❤

We love our Cherab Foundation Family and our supporters!! #asmileandavoice

crowdFunnit Crowd-Sources Special Events For Special Kids: crowdFunnit, a project of the 501(c)3 nonprofit Cherab Foundation, was created to bring people together, raising awareness about differences while fostering acceptance and compassion. Helping a friendless child celebrate a birthday is just an incredible mechanism in which to help make this happen. The party itself and any media attention it brings will help fight bullying at the root while the community connections will exist long after the party ends.