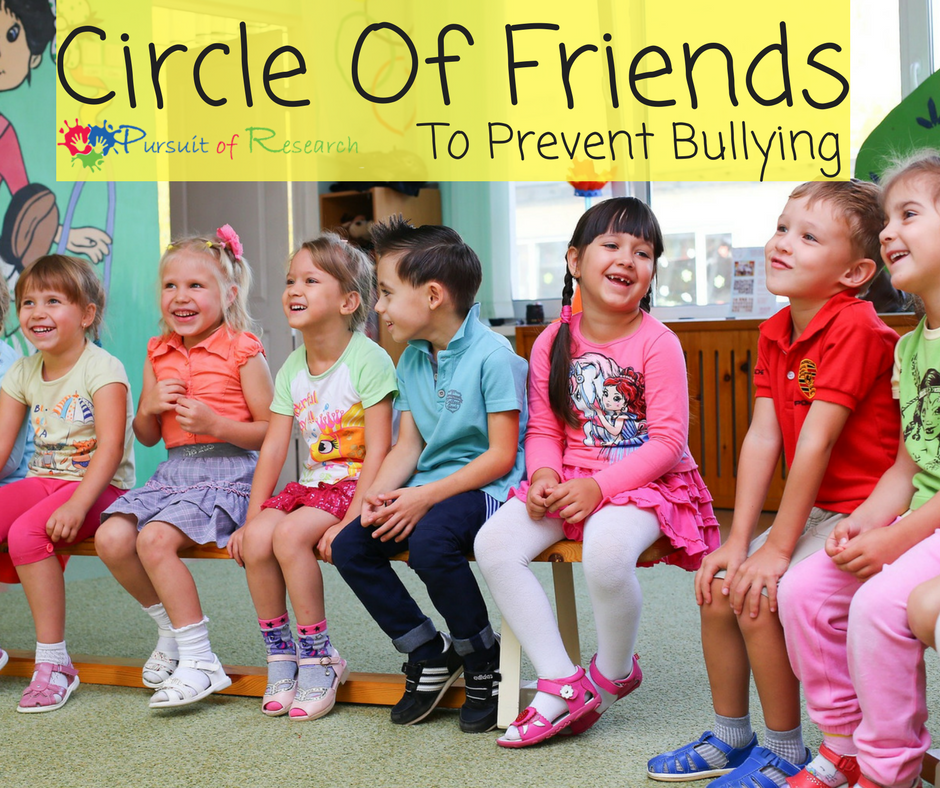 “I then let them know that Scooby Doo doesn’t talk like everyone else -“but he’s lots of fun and a cool dude to hang out with right?”

Description of a “Circle of Friends“

If your child has or is being teased, the following is an effective evidence-based technique that I first learned about from an award-winning Teacher of Excellence recipient Educational Consultant, and NJ State Teacher Representative Cherab’s Vice President Cheryl Bennett Johnson SLS MA.    I first used this successfully for my own children if there were any issues with bullying at school, and now use the same method on a community level with the highly effective Cherab Foundation initiative crowdFunnit throwing community birthday parties for special needs children to foster acceptance and compassion for those children that believe the world doesn’t like them, and need a little help making friends.

Children on the neurological spectrum may be ignored, or bullied by peers because of their differences, and due to this, they may behave inappropriately because they experience anxiety or even depression from being friendless.

The ‘circle of friends’ approach, sometimes known as the friendship circle, or circle of support, is a powerful tool for inclusion involving children sitting in a circle with their teacher using method-specific techniques and strategies to promote self-esteem, foster acceptance and compassion, reduce bullying and alienation while fostering positive classroom relationships.  It is supported by theories of self-esteem, emotional intelligence, and voice and participation theory, some that date back to the early 1900s.

The ‘circle of friends’ approach  (Forest et al, 1993: Newton and Wilson 1999; Taylor 1996, 1997) offers a structured intervention based on the belief that a person’s judgments about their behavior and that of others can be influenced by the social situation.  The intervention uses small-group sessions to give one specific child positive attention to help them interpret and respond to their environment and social situations with understanding.

The theoretical underpinnings for the many and varied traditional circle time sessions and small-group approaches are far-reaching and may well cite links to a person-centred counselling approach (Mead 1934; Rogers 1961, 1970); social learning theory (Bandura 1977); the circle of friends intervention approach (Newton and Wilson 1999; Taylor 1996, 1997); emotional literacy programmes (Morris and Casey 2005; Morris and Morris 2002); behavioural approached (Cooper, Smith and Upton 1994); and the eco-systemic approach Mosley 1993, 1996, 1998).

The circle of friends remains in the literature today even though many parents still don’t know about it, or how successful it is to help reduce and eliminate bullying.   In the UK in 1998,  Jennifer Mosley published the book ‘Quality Circle Time in the Primary Classroom: Your Essential Guide to Enhancing Self-esteem, Self-discipline and Positive Relationships’  and developed the whole school approach to the use of circle time (another name used for circle of friendship)

The main aims of circle of friends are:

When the teacher/facilitator effectively supports the Circle of Friends participants in delivering the intervention, positive outcomes are generally guaranteed. The target student will hopefully have gained in three key areas and be more able to:

The Circle of Friends group will also clearly have benefitted in terms of developing their own pro-social skills, empathy, ability to analyze others’ behavior and increased their awareness of the value and importance of including others in positive and meaningful relationships. As adults, we should never underestimate the latter.

As Newton and Wilson (1996) explain, ‘we have underestimated the therapeutic power of acceptance and overemphasized the negative influence of the peer group. The reality is that there are enormous benefits to all of the strengths of the natural peer group can be realized to support the vulnerable individual.’

Circle of friends has been found highly effective. One case study provided a fascinating insight into how the behavior of a child, previously isolated, changed to such a degree that she became a valued and accepted member of the class. Although the wide support that circle‐time has gained has largely been in primary schools, it appears to be enjoying similar success elsewhere.

Inspired by the work of numerous educators and researchers I’ve developed my own version of the circle of friends to help children with communication impairments that I’ve used with both of my boys which helped not just reduce but virtually eliminate bullying.  Through the Cherab Foundation, our CrowdFunnit initiative is taking a version of the circle of friends I used with my own boys to the community to help a student who believes they are alone in the world without friends.  Both of these programs, both school and community help foster acceptance and compassion to proactively reduce and eliminate bullying and alienation.   If your child needs help, please contact us

William is one example of a life that was turned around by the Cherab Foundation crowdFunnit program.  From the day after his birthday party till now over a year later he has friends, his grades and confidence have gone up, and as William says, “I like me now..if that makes sense”

Circle of friends to reduce bullying

Some children can be identified as being predisposed to become a victim of bullying. Typical features include:

Traditionally How Circle of Friends Works
Once the vulnerable student who is evidently in need of peer support has been identified, the teacher/facilitator can arrange to conduct the introductory session with the whole class/form group (in the absence of the target student). The ‘key’ activity undertaken is to complete a Relationship Circles Activity. This involves students in thinking about the people in their lives, family, friends and acquaintances and writing their names in a series of concentric circles. Instructions might be as follows:

According to a 1998 study ‘Practical approaches to reduce the impact of bullying.’ “Adults who look after children should be aware that these children are vulnerable to the attention of bullies. Supervision of children after an episode of bullying must be sufficient to protect potential victims. Classroom-based interventions such as “circle of friends” may promote victims’ prosocial behavior.”

According to PACER’s online National Bullying Prevention Center, “One study shows that 60 percent of students with disabilities report being bullied regularly compared with 25 percent of all students.”

Bullying is a form of youth violence.  Students who experience bullying are at increased risk for depression, anxiety, sleep difficulties, and lower academic achievement (Center for Disease Control, 2017).

A circle of friends is when you bring together all the children in the class. This would include your child of course. The discussion would be right in front of (your child) where (your child)’s speech disorder would be talked about, as well as how frustrating it is to communicate and how painful it is to be teased about it, etc. (your child) can add to the conversation if he wants, and everyone shares and learns.

Cheryl says it works so well that then the children in the circle of friends go out of their way to protect and watch over and translate for the child with the communication problem. Don’t just stick to the school either -do this with neighborhood children too.

Example of a Small “Circle of Friends!” by Lisa Geng

So how did I address the teasing when my son Tanner was teased in kindergarten?

Since I don’t believe in getting upset with children, especially kindergarten age children, and don’t believe lectures would work for this age anyway, I scheduled a “circle of friends” which the school SLP also took part in. I went into the class and with Tanner sitting right there I opened up with a question. “If someone from the cartoon Scooby Doo was out in the hallway right now…who would you want it to be? Scooby? Velma? Shaggy?” (knowing, of course, that just about all kids would choose Scooby which of course they did)

I then let them know that Scooby doesn’t talk like everyone else -“but he’s lots of fun and a cool dude to hang out with right?” Then I read a short Winnie the Pooh book about feelings -and used quick examples they could relate to for each feeling. When I came to sad – I talked about Tanner….and how he is sad when someone laughs at the way he talks. I explained to the class about how Tanner had high fevers as a baby that put a boo boo in his brain -but that he is very smart and has been working hard at learning to talk for years now. I talked about children that are deaf or that have other impairments (and the SLP and OT had brought in some of the children in the school in wheelchairs)

By this time -all the children were surrounding Tanner and putting their hands around him hugging him. We then went around the room and each child talked about something that they had trouble doing at first -and did anyone ever laugh at them while they were learning.  All the children brought up something that they had to learn -and some talked about how someone laughed at them when they fell off the bike, etc. However, when we got to the little boy that had teased Tanner he could not think of anything that he didn’t know how to do – he was the only one. The teacher said “Oh come on ____ when you were a little tiny baby you didn’t know how to skateboard now, did you? You had to learn that.” He agreed. I then talked about all the things that Tanner is really good at, and that “just like Scooby” Tanner may not talk like everyone else -but that doesn’t mean he’s not a cool dude to hang out with.

I then walked out to the hallway and got a bag of Scooby Doo party favor type toys and said: “Scooby left these for all of you guys!” The above was quick – but huge wonderful impact. 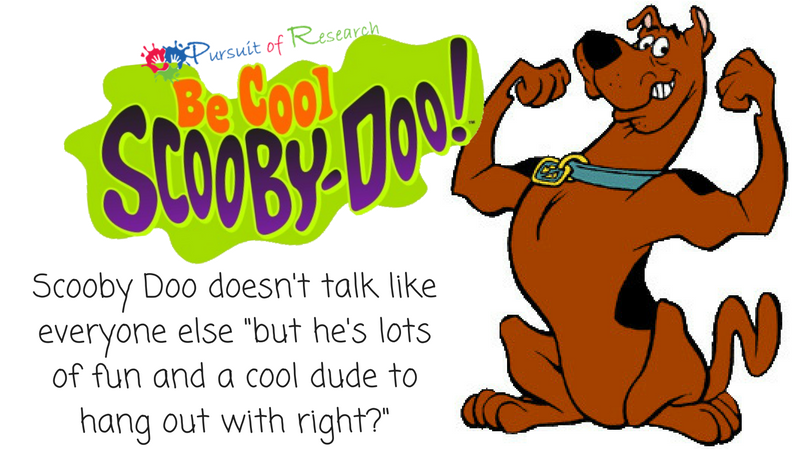 After that day -there was never teasing again -and even the one kid that had teased Tanner was now hanging out with Tanner. There was an immediate improvement in Tanner’s speech and confidence.  And…by the way, he then talked to me about what had happened and (finally) told me about how this little boy laughed when he talked. Even though the teacher said it was only for one week -I’m 100% convinced that she just was not aware of it prior -it apparently was going on 2 weeks prior.

Perhaps it’s due to that experience early on that Tanner is never teased now. He knows how to handle it -it’s hard for a bully to tease someone who doesn’t get upset.

There are two chapters in The Late Talker book devoted to dealing with parent or child frustrations.”

Author and Executive Director of The Cherab Foundation
Lisa Geng got her start as a designer, patented inventor, and creator in the fashion, toy, and film industries, but after the early diagnosis of her young children, he entered the world of nonprofit, pilot studies, and advocacy. As the mother of two “late talkers,” she is the founder and president of the nonprofit CHERAB Foundation, co-author of the acclaimed book, The Late Talker, (St Martin’s Press 2003), and is instrumental in the development of IQed, a patented nutritional composition. Lisa recently served as a parent advocate on an AAN board for vaccines and is a member of CUE through Cochrane US. Lisa is currently working on a second book, The Late Talker Grows Up and serves as a Late Talkers, Silent Voices executive producer. She lives on the Treasure Coast of Florida.